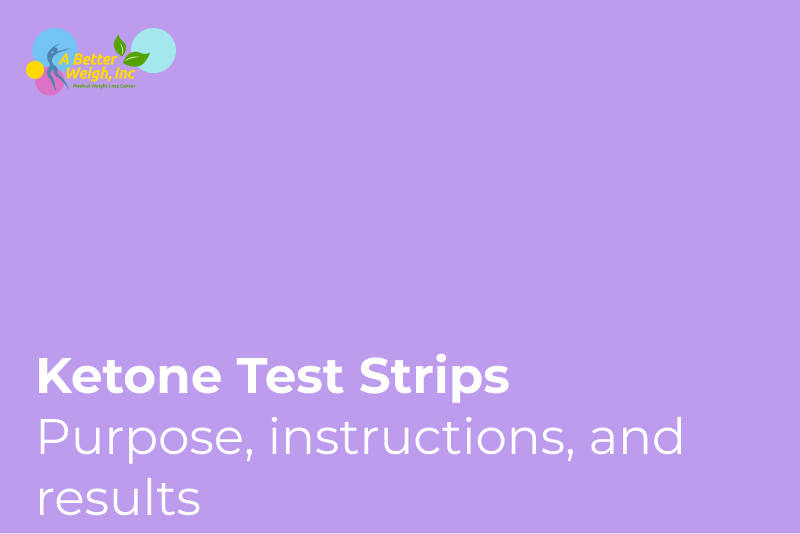 The ketogenic, or keto diet, is a diet where you focus on eating low amounts of carbohydrates, high amounts of fat, and moderate amounts of protein. It is well known for its numerous benefits, such as weight loss, reduced overall inflammation in the body, stable blood sugar levels and blood pressure, as well as higher energy levels and a better focus. When you take up keto, you aim to deplete your stored glycogen, which comes from carbs, and switch to fats as your primary fuel source. When that is achieved, you enter a state known as ketosis. So, how do you determine whether you have reached ketosis or not? Ketone test strips are used for that purpose. So, in this article, Chicago’s best weight loss expert explains what they are and how to use them to measure your ketone levels.

What are ketone test strips?

Ketone test strips are thin strips of plastic with a reactive pad at one end which measure the presence of ketones in your urine. The pad is made from a special type of ketone-reactive paper that detects whether ketones are present in your urine and to what level. The paper changes color in accordance with the level of ketones, which you can then compare to the color chart that accompanies them and determine how close you are to ketosis. The urine strips are the quickest and most affordable way of testing for ketones. Other than that, blood ketone tests were initially created for people with diabetes. They are more complicated to use, as you need a meter to read the results. However, although they differ from blood glucose test strips, most blood glucose meters can read them.

Why should you test for ketones?

Several signs can show you that you have entered ketosis. The increased thirst is probably the most common and the easiest to notice. If you are suddenly feeling ”keto thirsty”, that’s a clear indicator that your body has switched from burning carbs to burning fat for fuel, which is to say, that you are in the state of ketosis. Other symptoms include but are not limited to:

So why test for ketones? Well, simply put, everyone is different. Everybody is different and reacts differently to changes in the diet. For some people, certain symptoms may be highly pronounced, while others are entirely absent. For others, it may be the other way around. Also, the intensity of a symptom may vary individually, even if everyone experiences it. Therefore, while they help, observed symptoms should not be considered an objective indicator. We highly advise you to test for ketones to measure your progress towards ketosis. You should test daily in the initial phase of your keto diet to ensure you have reached the state of ketosis and then reduce it to once a week later on in order to control whether your diet is progressing as planned. It is best to check your ketone levels at the same time of the day in order to avoid temporary factors influencing test results. You can time them in relation to your first or last meal of the day.

How to use them?

As you limit your intake of carbs, your stored glycogen is quickly depleted. Once that occurs, your body starts burning fat for fuel. As fat is being broken down, your liver produces ketones, the chemicals that give the ketogenic diet its name. They enter your bloodstream and urine, and from there, they can be measured using ketone test strips.

Urine test strips are the easiest and most widely used method for testing your ketone levels. You need no meter or additional equipment, and you can buy ketone strips online. There are generally two ways you can use them. You can urinate directly on them or immerse them in a urine sample in a small container. Although urinating directly on the test strip is quicker and more convenient, there’s a risk that the stream of urine may wash off some of the chemicals on the reactive pad that measures ketone levels. That way, you could get inaccurate, lower readings as there aren’t enough chemicals to react to ketones. That’s why we recommend doing it the other way, by immersing the strip into a sample. So the process is the following:

Blood test strips may not be as convenient to use as urine test strips, but they are a highly accurate and reliable way of measuring your ketone levels. They were initially created for people with diabetes, but their use has subsequently expanded to followers of the keto diet. Keep in mind that you will need a meter to read their results. Most blood glucose meters can read ketone levels as well. This is how to use them:

How accurate are they?

Testing for your blood ketones is more accurate than testing your urine because your urine responds to the amount of fluid you drink and can be more or less diluted in some moments. So your urine test results may read negative even if you assumed that you were in ketosis at the given moment. There is no change in the reactive pad’s color, which means no ketones are present in your urine. But that’s not a reason to worry, as it doesn’t mean that your body isn’t producing any ketones, but simply that there are no ketones present in your urine at the moment. Don’t make any changes to your diet. Stick to your keto meal plan and consistently measure your ketone levels. If you keep getting negative results for several days in a row, you should review your diet and pay closer attention to how accurately you follow your meal plan.

Generally, urine test strips have proven to be better in the early phase of the keto diet. As you are yet adapting to the switch from carbs to fats, your body is not yet so effective in utilizing ketones for fuel, so more of them are discarded through urine. However, over time your metabolism will get more and more optimized for using ketones, leaving less to be found in urine. So, the longer you are in ketosis, the fewer ketones will be measured in your urine, to the point where only traces will be left. That could lead you to the wrong conclusion that you are not in ketosis anymore, which is most likely not the case. So, in the later stages of the diet, after several months or so, blood test strips are a much better option.

Also, there are specific measures that you should take to make your ketone test strips as accurate as possible. If mishandled, they may end up compromised and lose their effectiveness. First of all, read the expiration dates. In addition to that, make sure to follow these instructions:

Ketone test strips are a simple and convenient method of measuring your ketone levels. There are two types – urine test strips, which measure the presence of ketones in your urine and are more effective in the early stages of the diet, when your body is not yet so efficient in utilizing them for fuel, thus leaving more to be found in urine; and the blood test strips, which are highly accurate and recommended for use later on in the diet, when your body fully adjusts to ketones as an energy source. Numerous signs and symptoms can show you whether you have reached ketosis or not. However, they vary individually and, as such, are not entirely reliable. Therefore, testing for ketones using specialized test strips is highly recommended, both in the early stages and later on, to control your progress. If you’d like to learn more about testing or the keto diet in general, schedule a call with us today.

Born and raised in Chicago, IL, Chanay received her Practical Nurse licensure and went to work in clinical specialties such as Home Health, Assisted Living, Long-Term Care and Dialysis Centers. Through this work, she realized the importance of diet, nutrition and weight loss among her patients. This led her to open A Better Weigh, Inc. Medical Weight Loss Center in 2009.

Save On A Better Weigh Products And Services Or Purchase A Gift Card.

Ozempic vs. Mounjaro: Who wins in the battle for weight loss

Wegovy vs. Ozempic for weight loss: Are they the same?